For children with autism, drowning is a very real threat. A program in New Windsor is changing that. 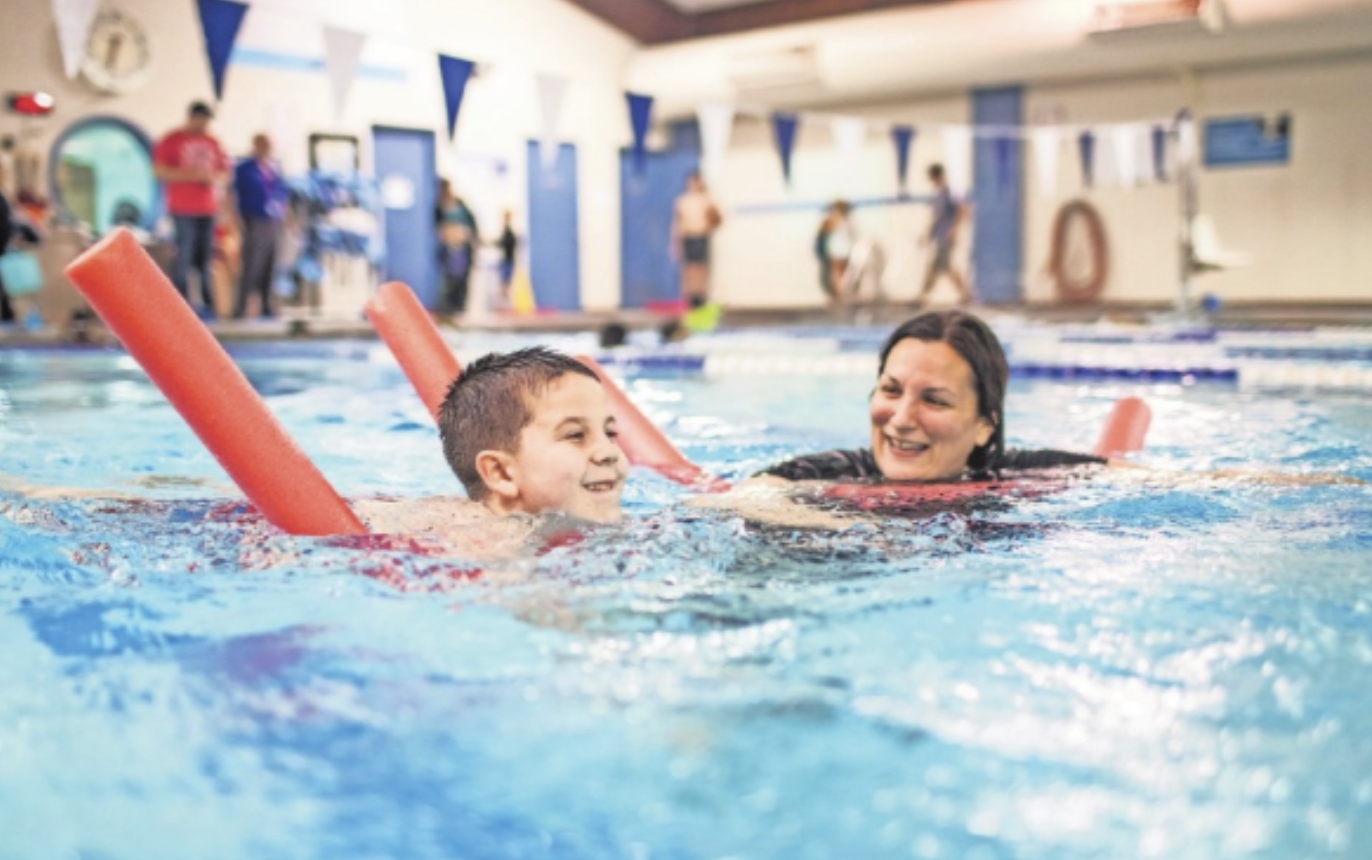 11-year-old Adrian Gokey was initially very curious about water, and asked a lot of questions. Now, he can kick his way across the entire pool, says instructor Erica Tortorella. [PHOTO BY ALLYSE PULLIAM]

"Before her son was even born, his mom dreamed for him.

He would grow up to heal others by becoming a dentist. He would swim on a swim team, just like she did. He would have Spanish-speaking nanny so he would be bilingual.

How could Erica Tortorella know that her son RJ would be born with a disorder, autism, which means the 5-year old isn’t able to speak, let along swim on a team in the community where they chose to live, Pine Bush, because its high school has a top swim team.

Yet because of his autism, RJ Sanders has managed to do more than help heal other people. Through his mom, he may have unwittingly helped save the lives of children with disorders like this.

Three years ago, RJ nearly drowned. That’s the leading cause of death among kids with autism when they wander from their safe environments, something they’re far more likely to do than those without autism.

This is one reason Tortorella teaches those with autism to be safe in the water and, if possible, to learn to swim at the Union Avenue Community Fitness Center in New Windsor, in a program she says is the only autism-specific one in the region.

She does that because she knows all too well the stomach-sickening terror of what almost happened to RJ.

It was a sunny day in July 2015 when Tortorella, her husband, Raymond Sanders, and 2-year-old RJ went to a backyard barbecue in Campbell Hall. As a band played swinging jazz and Tortorella did what she always did - keep an eye on RJ - the other kids wandered over to the pond in the yard. They stood on the dock over the water and began feeding the fish with crumpled-up bread.

All of sudden, she saw RJ walking onto the dock. As she ran to stop him, he lay down on his belly and tried to drop himself into the water before Tortorella grabbed him and carried him out of danger.

“I was just trying to save his life,” says Tortorella. “I didn’t know what he did was a trend for kids with autism.” 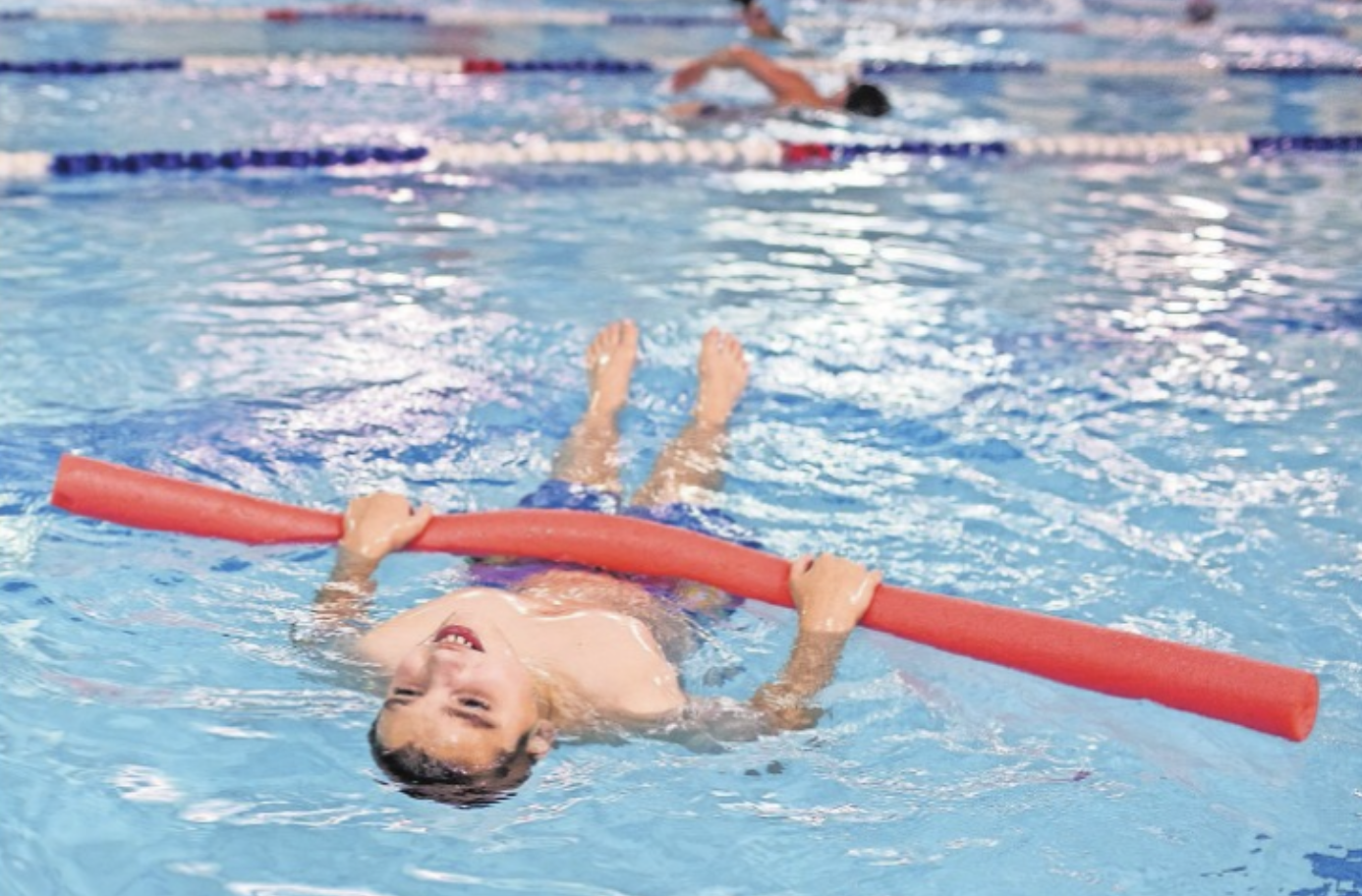 John Facer, an 11-year-old with autism, learns to swim at the Union Avenue Community Fitness Center in New Windsor. PHOTOS BY ALLYSE PULLIAM

Erica Tortorella knows how lost a parent of a child with autism can feel, especially when it comes to the safety of the children who are four times more likely to wander from a safe environment than their neurotypical counterparts.

“There is no roadmap that tells you how to get through it the right way,” she says. But there are a few things parents can do to keep their children with autismsafe, at home and in a new, potentially dangerous place like a pool. 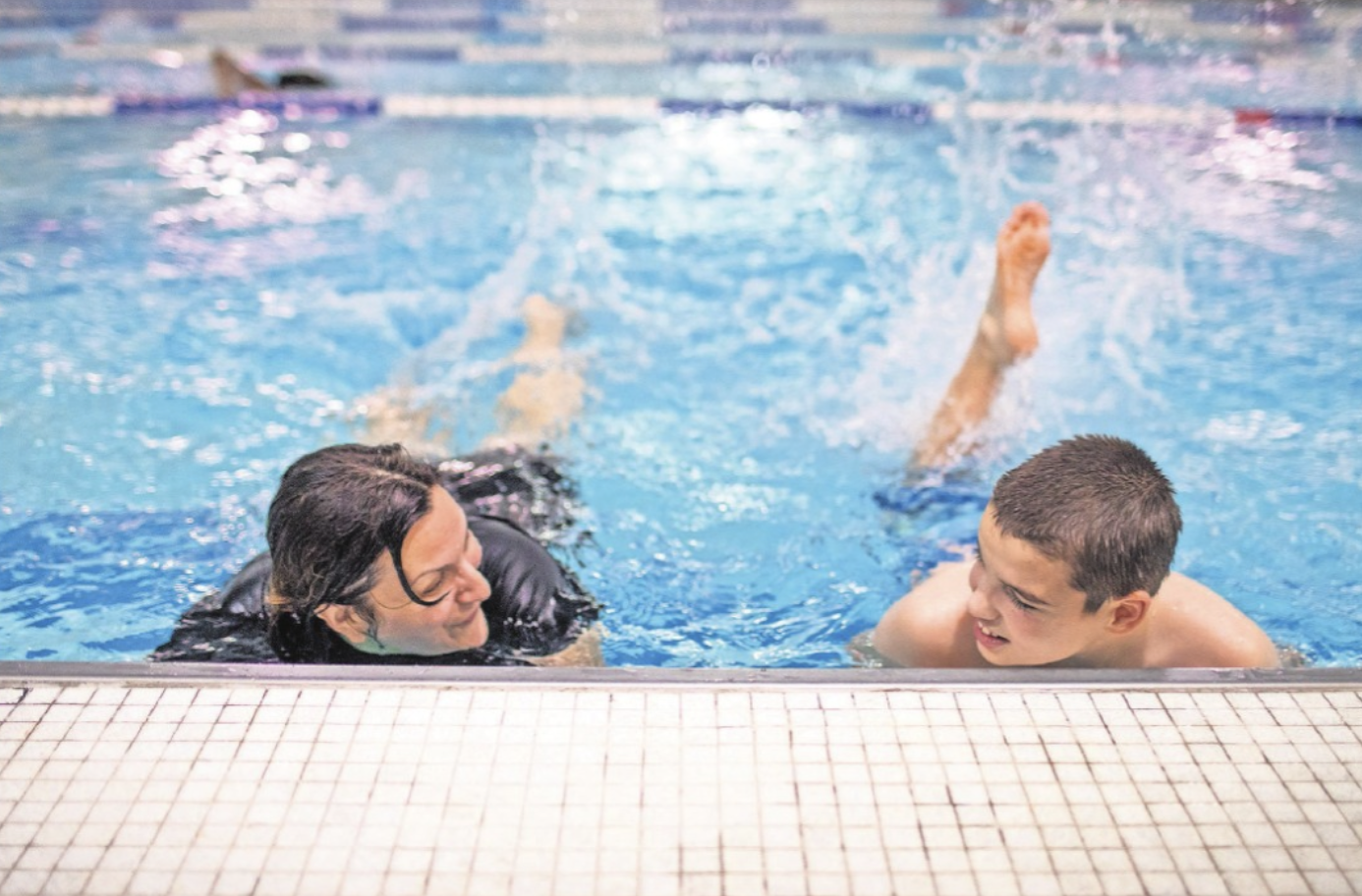 Erica Tortorella shows 11-year-old John Facer how to kick in the pool. PHOTO BY ALLYSE PULLIAM

She soon learned that what almost happened to her son happens all too frequently to kids with autism, who are nearly four times as likely to “elope” from a safe environment than those without autism, according to National Autism Association. Of the deaths caused by wandering, 90 percent are attributed to drowning.

Children with autism may be particularly sensitive to and disoriented by things we take for granted: a grate in the street, the sand on the beach, an escalator, or, in RJ’s case, the way the fluorescent light reflects in a supermarket aisle, which was why he screamed when he and Tortorella turned down an aisle at Hannaford’s in Pine Bush. They often feel disconnected from the reality we take for granted.

“It’s like when we wake up in the middle of the night and don’t know where you are or how you feel,” says Tortorella. “That’s how they feel all the time.”

But one place many children do feel comfortable is water. While some children with autism can be overstimulated by the multi-sensory impact of water - its feel, the sound of the waves and the reflections of light on its surface - water is “soothing to most children with autism,” according to an organization dedicated to safety for children with special needs, AngelSense.

That’s why RJ, who loves looking at pictures of almost any body of water, has learned water safety from his mom in spots ranging from the family’s backyard stream to the Gulf of Mexico. 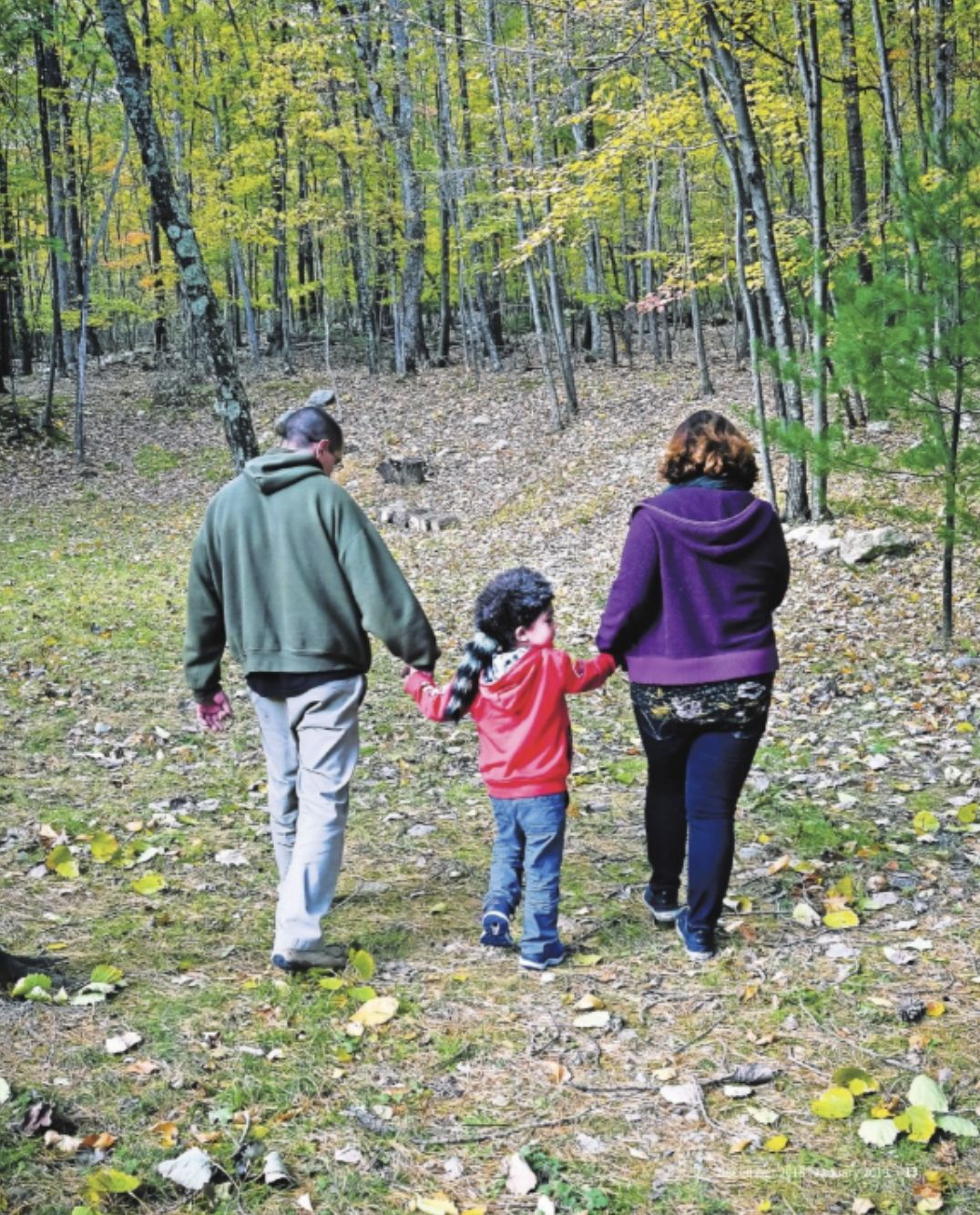 At right, Erica Tortorella, son RJ Sanders and husband Raymond Sanders walk in the backyard of their home in Pine Bush. [PHOTO BY JOHN DESANTO]

“They get in the water and it feels really good,” says Tortorella. “They can feel their bodies; it’s therapeutic.” 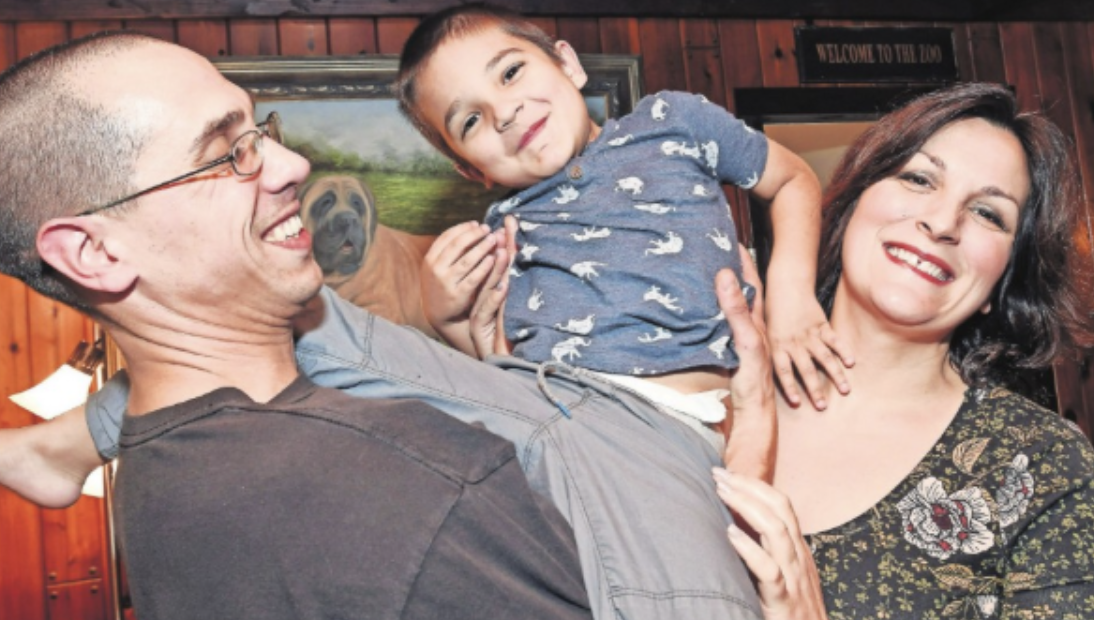 Erica Tortorella; her son, RJ Sanders; and her husband, Raymond Sanders, play in their home. When RJ who has autism, nearly drowned three years ago, his mother became determined that he, and other autistic children, learn to be safe in the water. JOHN DESANTO PHOTO 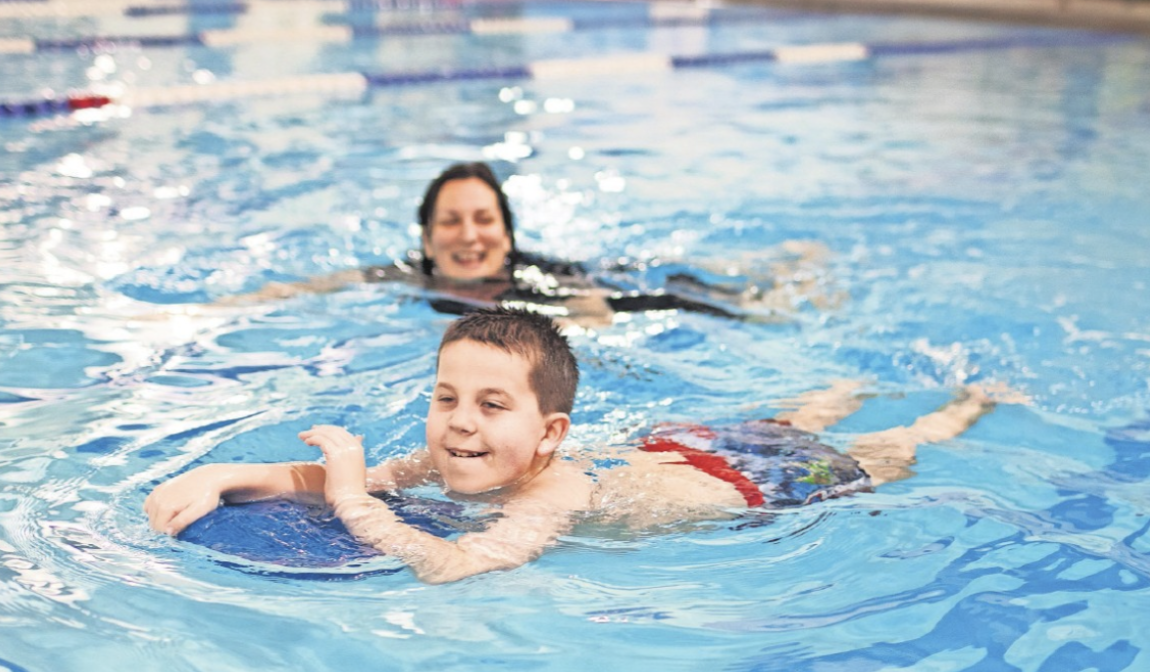 Since Adrian Gokey was first introduced to the pool, he has developed real swimming skills. PHOTO BY ALLYSE PULLIAM

That may be why many kids with autism like RJ, who communicates mainly by sign language, gesture, Picture Exchange and iPad, are almost automatically attracted to it.

Take one of the children Tortorella teaches in the half hour, individual swim lessons in the big competition-size pool at the Community Fitness Center, 4-year-old Levi Persaud of Central Valley.

“His passion for the water is extreme,” says Levi’s mom, Eve Persaud. “If he saw water anywhere, he’d want to go in.”

But teaching kids with autism how to be safe in that water presents unique challenges. “It’s not like you show them the world,” Tortorella says. “They show you theirs.”

So Tortorella, an Autism Swim Approved instructor, tailors each of her 30-minute individual classes to the child she is teaching, some of whom might not be able to speak or stand in the water, let alone swim. Thus, the goal for some children isn’t necessarily swimming; it just might be floating on their backs, so they can be safe in the water.

“The idea is to teach them to not drown,” Tortorella says.

So she uses a few words as possible - “belly up,” “head back” - and tries to teach by doing.

She stands in the water with Levi, who is on a portable platform so his head can be above the 4-feet-deep water. She dips her head into the water and blows bubbles. The goal for the boy, who in his first lesson held onto Tortorella and wouldn’t let go, is to feel comfortable with his head under water.

“Because if he fell in the water he would have it in his nose, eyes and mouth,” Tortorella says.

At first, Levi shakes his head and looks away. But with soft and soothing words of encouragement from Tortorella, he’s soon putting his face in the water and blowing bubbles.

He even lets go of the platform and doggie paddles. And then, with Tortorella holding him, he gets on his back and floats for 1, 2, 3, 4, 5 seconds.

Levi can’t say that he’s learning or enjoying the water, but when his mom tucked him in his car seat after the third lesson, Levi gave her a big kiss on the lips.

Newburgh’s Emily King, 10, might be unwilling to walk on the sand, ride an escalator, or wear a hat, but she’s always loved the water, even though she never learned to swim. Although she can walk and bounce in the water and dunk her head, face down, she won’t do what Tortorella wants her to do: float on her back.

So Tortorella shows her how to lean back slightly, with the back of her head in the water - the first step before floating.

“I know what you’re up to,” says Emily, before she eventually obliges for 1, 2, 3 seconds, and laughs.

And before you know it, Emily, who now also wears the goggles she refused to wear when she started the lessons, is holding onto the side of the pool and floating her way down toward the deep end - 7 feet, 11 feet, 12 feet.

“I can’t stand,” she says. But she doesn’t want to get out of the water.

Eden Facer, 13, is learning water safety with Erica Tortorella, and can now feel comfortable in the deep end. PHOTO BY ALLYSE PULLIAM

John Facer loves to swim, and has been extremely enthusiastic about the pool, says instructor Erica Tortorella. PHOTO BY ALLYSE PULLIAM 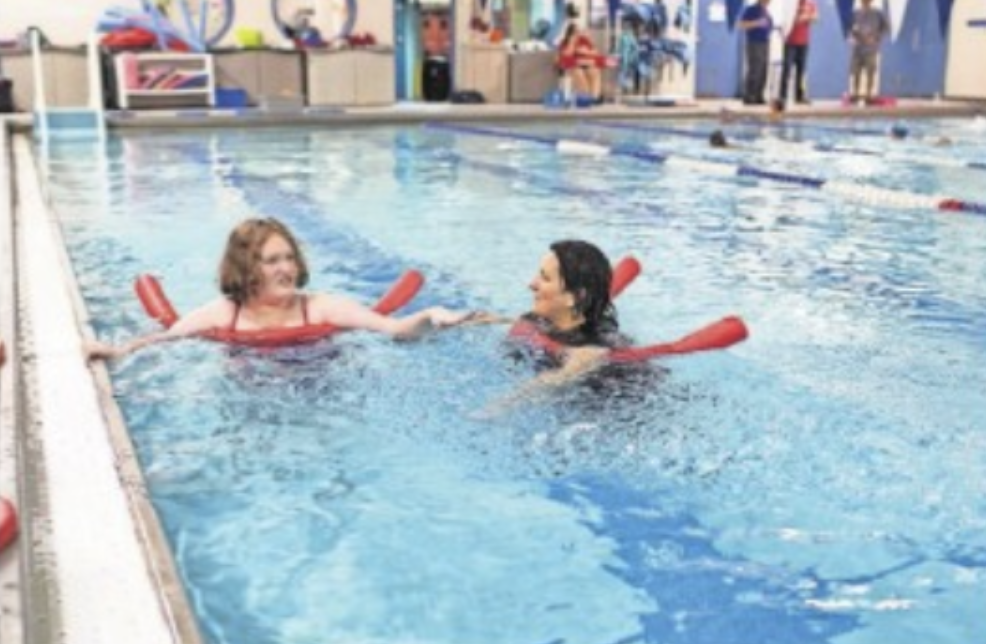 Click here to download this blog as a pdf
Previous
What’s a social enterprise? How can I help?
Next
Autism Swim sponsors swimmer in the UK